I was out of town attending the ZendCon conference in Santa Clara last week. The conference took pretty much all day when you counted in the breakfasts and after session receptions that they had. After returning to the hotel in the evening, I would spend a lot of time catching up on emails and work that I had missed during the day. Consequently, my regular routine was rather messed up. I expected this to happen, but I didn't expect the results I found when I came home and tried to jump back into everything as though nothing had happened.

The first thing I noticed that was off happened on Saturday, when I tried to go for a run. I hadn't done any type of exercise at the conference, but I had been lazy for a week or so before that as well. The interesting thing was how sore and tired I was after this run. I came home, took a shower, went to bed, and slept for the rest of the day. This was really strange to me considering that I was training for a triathlon this summer and got used to distance running. This was half the distance of my normal training run and was a lot slower. It just surprised me how fast you can revert if you let up just a little bit in your exercise patterns.

This really hit me on Wednesday when I attended my symphony rehearsal. I had only missed one week and thus only one rehearsal. However, I played terribly. It was like I was trying to site-read the music. Not only that, but my fingers weren't hitting the right place on the fingerboard, so I was out of tune the whole time as well. Surprising that I only miss one rehearsal and this is what happens.

It just goes to show that consistency is key. In music, don't stop practicing or you'll slide backwards pretty quickly. In sports, you'll be out of shape really quickly if you get out of your training routine. Just stick to your routine, practice deliberately, and keep improving!
Posted by mr mike at 5:13 PM No comments: 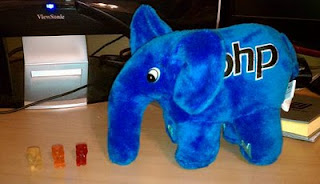 I spent this week at ZendCon, which is a great conference for PHP developers like me. There's sessions on a lot of the Zend products such as the Zend Framework and Zend Server, which are two products I highly recommend for PHP development. There's also presentations about related database technologies, security, and many other things related to development.

One thing I thought was interesting about the conference were the sponsors. Some of the main sponsors included Intel, Adobe, and Microsoft. What does Intel have to do with PHP? They were doing a demonstration about how you can speed PHP up quite a bit if the engine is compiled with their compiler rather than GCC. I don't know how many people are going to go and compile PHP's engine though - it comes with basically any Linux distribution and is distributed in binary form for other platforms. Adobe has their own product - Coldfusion - which you might think is a competitor for PHP. I guess they're there to encourage Flash development. Microsoft is definitely interesting because they also have their own products - ASP & .NET. Why would they want to support PHP? Perhaps they'd rather have you run PHP on Windows Servers with IIS than on Linux boxes, so presenting themselves as a viable alternative might be a good reason.

I just thought it was interesting to see who the sponsors were. However, I am very grateful and glad that they would sponsor ZendCon and encourage PHP development.

Like most conferences I've been to, ZendCon had some vendor booths where companies were demonstrating their products. I thought there was one great example of a failure in marketing that I had to write about. In our registration packet, we received a little flyer that had this printed on it:

That's all, nothing to give you a hint about what it was, and nothing printed on the other side. To me, this is a serious marketing failure. (Not that I'm the best at marketing, but I do have an MBA and have seen plenty of advertisements in my time.) Let's look at how this fails.

Failure #1. It doesn't say anything about the product. I can't look at this and say "oh, I should look into this company/product, it looks interesting or useful to me." It also doesn't give me any information on where I can go to find more information. There's only the logo and text "Mashery" which I can only guess is something I should run a Google search on.

Failure #2. It offends me. I'm not sure if this is something I'm supposed to understand. It makes me feel a little dumb that I don't understand it. That is not something you want to do to your customers.

Failure #3. It doesn't speak to an audience. I can't tell if I'm the target or not. I'm assuming that I am because it came in my registration packet. But I can't tell if this add is meant for me or not.

Failure #4. It doesn't give me any confidence in the company. It looks like somebody pounded on the keyboard and decided to use that as their advertisement. Is their product going to be the same way?

Failure #5. It requires me to go search for information about them. Normally, I wouldn't, but since there weren't too many vendors at ZendCon, I stopped by their booth. I'd have to say the booth was fairly disappointing and plain. I also checked out their website, hoping I could write something good in this review. But the website is horrible as well.

In all fairness, Mashery (I still don't really know what they do) ran a contest at ZendCon that a lot of my fellow attendees really enjoyed. I'm guessing that had more of an impact than this advertisement did.

Marketing failure #2 was with Zend themselves. They have a little blue elephant mascot named Elephpant (pictured above) which is pretty cute. However, at ZendCon, they tried to get someone dressed as an elephant to walk around and interact with the people. That's a great idea, but the execution was horrible! The costume mascot looked nothing like Elephpant. The costume was not blue, it didn't have PHP on it (they did throw a PHP/Zend t-shirt on it, but it looked like it was an afterthought), and it just looked terrible. It looked like someone ran down to the costume store and asked for anything that looked something like an elephant. This is just something you don't want to do if it's your company and your brand that you're trying to show. I'd rather have no elephant than a crazy looking elephant-ish thing.
Posted by mr mike at 7:06 PM No comments: