There are sirens all around...

My wife and I spent a weekend in Boston recently. One thing we noticed was that we could sleep really well there. It was so nice. The first reason was fairly obvious. We left our kitties at home. They've lately adopted the routine of waking us up multiple times for food or attention at all hours. We love the kitties, but it would be nice if they let us sleep more often.
The other reason wasn't immediately apparent. I couldn't quite put my finger on it until we saw an ambulance driving down the street. We were like - "heeeyy, there weren't any sirens last night." We haven't had a siren-less night in quite a while. The ones near our house are especially annoying in that it's like the drivers are starting and stopping them repeatedly. There's no constant rhythm to them. They also go off at all hours of the night, driving us crazy.
Posted by mr mike at 3:29 PM No comments: 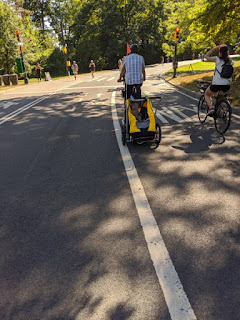 Central Park is always an interesting place for people watching. Like this guy & gal who are biking around with their dog. That's not too strange, I would put my cat in one of those carriers if I thought he'd actually behave.
But the tourists in Central Park can be dangerous. I had a couple miles left to finish out my century this past weekend and so decided to take a couple laps around the park. The tourists were a big problem. Many of them are on rented bikes that look very sturdy but a little clumsy. It seems like these people haven't been on bikes for many years because they're pedaling slowly and wobbling around in their lane (if they even try to stay in the bike lane). I almost crashed into a couple of them because they were just doing dumb things.
The first one was this old guy who dropped a bag from his bike. That happens, but he looked down and back at it (while still moving forward) and then turned abruptly and slammed on his brakes. He stopped perpendicular to traffic, blocking two of the lanes. I did yell at this guy, but it was more of a "watch out" as I quickly dodged around him than anything angry.
The next guy was more fun. He and his girlfriend were pedaling up-hill. Like others, they were going slowly and wobbling quite a bit. In this scary state, the guy saw a chipmunk cross the road in front of him. He decided to point it out to his lady, but in doing so lost control of his bike. He wobbled over and collided with her front wheel, almost knocking her over. Luckily, they were going slow so no one fell and got really hurt. Many people around just laughed at them.
Posted by mr mike at 5:44 PM No comments: 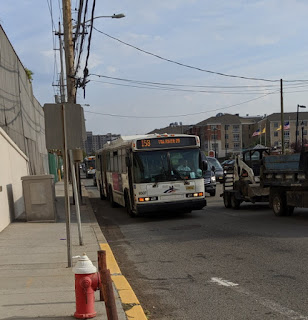 On this particular day, I sat and waited at the bus stop as 10 full buses drove by. They had no room for more passengers, so they just kept going. Finally, I was picked up by the 11th bus (it might have actually been the 12th, I was pretty mad by then).

Luckily, the buses come so often during rush hour that I only waited like 10 minutes or so.
Posted by mr mike at 4:01 PM No comments:

The Scariest Subway Exit (So Far)

We took a subway ride on our way home from the American Museum of Natural History. We stopped at the Port Authority stop, where I go almost every day and have never really had a problem before. We wanted to get some dinner, so we took a different exit (8th Ave & 40th) than I have in the past. It was probably the scariest 50 feet of NYC that I've seen yet.
My first thought was that the tunnel leading from the subway to the street felt weird. This is a pretty popular subway stop, but there was basically no one going this way. Soon after you start walking down the tunnel, you're greeted by this very shady looking video store. (Really? who uses video stores anymore?) Plus, most of the front windows were covered up. I didn't want to look too much more into it, so we tried to hurry past it.
Right next to the video store, there's stairs leading up to the exit. Again, these were empty save for two people at the top of the stairs. They were acting kind of weird, and I was sure they were drunk or high or something, so we tried to hurry past them on the other side of the tunnel. We had barely past them when they started yelling and throwing punches at each other.
My wife said one of them hit the other one and knocked him down the stairs. I didn't see that because I was focused on avoiding the homeless guy crawling around on the street in front of us while mumbling and picking up fries. (Manhattan street fries? I'm sure that's safe). We hurried past him and the other homeless hecklers and made it to the main street where there were a lot more people.
Interesting adventure, at least I know to avoid that exit now.
Posted by mr mike at 1:57 PM No comments:

A Manly Man with a Fan

We took the subway to the American Natural History Museum the other weekend. Since it was a Saturday, the train was rather crowded. Luckily enough, some people got off the train after a couple of stops and we were able to grab some seats.
At one of the next few stops, a tall man entered the train. It was already crowded, so he barely fit inside the door before it closed. He then leaned back against the door to rest. He was a very manly man - tall, looked like he worked out, had long hair done up in a manly way, and he had a nicely trimmed mustache. However, to our surprise, he pulled out a pink fan - one of those cheap, fold-able, paper fans - and began fanning himself on the subway.
This guy was secure enough in his manliness to pull out and use a cheap pink fan on the crowded subway. I solute you Mr. Man.
Posted by mr mike at 1:36 PM No comments: