I really like Amazon.com. I love my Kindle and I end up buying most of my books and random items from them. About the only thing I don't buy there is food. However, I've heard they will soon offer a grocery delivery service, so that might change in the future.

I've experienced some very strange things with Amazon lately, things which I find very interesting and thus they've ended up on this blog.

First was that I got called by a recruiter about a month ago. I don't remember actually applying for a job but I think I sent them my resume three or so years ago. So I was surprised to get the email. Although I wasn't looking for a job, I wasn't opposed to the idea of learning more about the position. I would really have liked to see their headquarters, so I set up a phone interview.

The first interview was very interesting. The guy was a regular employee, not a hiring manager and didn't work for the same division where they had the opening. He couldn't tell me much about the job, so he just answered some basic questions. He also asked lots of general programming questions. I think this first interview went rather well.

About a week later, I had a second interview with a hiring manager from the prospective department. He asked similar questions and asked about my background. The interview took more of a conversational tone and I thought it went alright. The one question I couldn't answer was "why did you apply for this job?" Well, I didn't. The recruiter contacted me about it. He didn't seem to like that answer. Other than that, I thought the interview went well. It lasted 45 minutes and ended on a good note. I got an email the next day saying that they picked someone else. Oh well, no loss to me.

The second interesting item came from their recently-launched appstore. I was interested to see how Amazon would differentiate themselves from the regular Android marketplace. One thing I noticed was that Amazon is giving away an application every day. You open the store and they show you the free app of the day. Usually the price is shown, but is crossed out and the word "free" is printed next to it. I was surprised the other day when I opened the store and saw this: 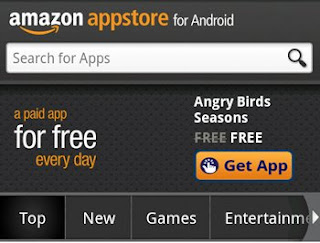 Notice how the word "FREE" is crossed out and "FREE" is printed next to it? How silly is that? Additionally, I had already got Angry Birds Seasons from the Android Marketplace (for free). This makes me wonder if I need to check both App stores to find the best price.

I'm a little curious how Amazon gets away with creating their appstore. Does Google get anything for apps sold there? I somehow doubt it, which is a little strange because Google created the Android OS and the development tools for it, but Amazon is trying to reap in the money for it. I can see Amazon supporting Android because of the recent issues with publishing items in the Apple App Store. The Android platform would make even more sense if future versions of the Kindle run the OS. I could see that happening quite easily.
Posted by mr mike at 11:46 PM