Why all the H8 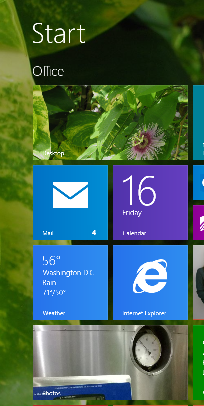 I've previously featured Windows 7 as a software bliss example. More recently, Windows 8 and 8.1 have come out and it's been interesting to see how they've been received. There have been many good reviews, but there's been a lot more negative things said about it.

Personally, I don't understand all the negativity. A lot of it is focused on the new Modern UI and how it doesn't fit so well on desktops. I can see that, but if you don't like the modern apps, then just don't use them. The regular Windows desktop is still there and works pretty much how it always has.

There's a lot of things I really like about the new Windows. One of them is the new start screen. I think it's done really well and it helps me find a lot of information quickly. I've set up a few tiles to auto-update - stocks, weather, email, pictures, etc - so every time I see the start screen I know what's new in all of these. I think of it a lot like the Mac OS Dashboard, except I actually look at and use this one. I've tried to set up and use the Dashboard many times, but I always seem to forget it exists after a day or two. I've noticed the same from many Mac users I know.

Another thing that's great for me is having Hyper-V built in to the non-server editions. I don't have to install Virtualbox anymore, and it actually works better for me. Hyper-V will automatically pause my VMs when I reboot the machine and start them up again after reboot. I never got that working with Virtualbox and it was always a pain.

Anyway, there's some good about the new Windows and there are drawbacks as well. It's just fascinating to me because it seems customers want change but they want everything to stay the same as well.
Posted by mr mike at 7:32 AM

Email ThisBlogThis!Share to TwitterShare to FacebookShare to Pinterest
Labels: computers