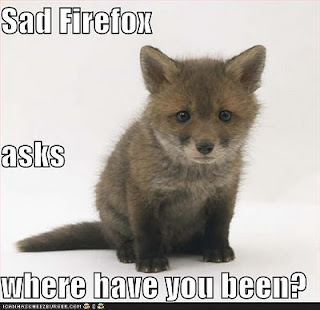 I've finally given up on Firefox. It was my default browser for years and the first application I would install on a new computer. Now I realize that I haven't even installed it on my last two computers. I think other browsers have gotten a lot better while Mozilla has broken down.
I've been pondering where Firefox really went wrong. I know I stopped using it around the time they released version 4. The redesign just didn't feel right and the new rapid release cycle kept breaking plugins. Plugins were a key feature that made it such a great product for me. It became difficult for me to use it to get my work done. I keep hoping things will get better with the new releases, but it looks like things are still breaking.
At the same time, the other browsers kept getting better. Chrome has worked beautifully for me for quite some time. It's quick, has really good development tools, and I've never had an upgrade break an extension. I have to admit, winning a ticket to Google IO last year for developing a doodle did sway me towards Chrome for a while. Now I just think it's a better browser.
It's not just me though, Firefox's market share has been falling slowly all year while Chrome's has been growing rapidly. Analysts predict that Chrome might overtake Firefox as the #2 browser by the end of the year.
I don't have a whole lot to say about Internet Explorer. IE 9 is actually a good product. It's got pretty decent developer tools and it's much better at complying with internet standards. My best praise for it is that I don't hate it anymore. That's a big change since the days of IE 6. I don't mind using it when I'm on a Windows box. I still prefer Chrome, but I'd put IE above Firefox.
So, what is so interesting about this? Well, I've seen some very strange software decisions in the past few years. It seems that there is a point where good products jump the shark and start being unbearable. This is a very interesting trend, one I would like to explore a little more.
The failure of Firefox was most noticeable to me because it was a product I used and enjoyed every day. Other projects I've seen turn into a complete mess include Gnome, Ubuntu, portions of Windows, and portions of OSX. Look for more Software Sadness articles on those items in the near future.