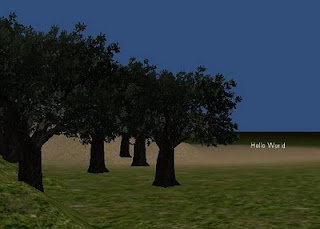 It's been a while since I've had an artist night. I have been distracted with other things happening in my life. Lots of traveling, taking tests, applying to schools and such. But now thing's have calmed down some, so I'll get to do fun things again.

Artist night this week was about making video games. I've been wanting to try it for a while, and I got into 3D math and matrices for a while when I was programming with OpenGL. I realized I'd have a whole lot to program if I really wanted to make a game though, so I started looking for game making programs that could handle physics, collision detection, lighting, and all that other good stuff. I came across two that looked promising: Shiva 3D and Unity 3D. Of the two, Unity seemed to be a little more developed and had better documentation, so I gave it a try. I might try out Shiva in the future - it is much cheaper.

The first hour of artist night was spent going through some tutorials and kind of figuring out the program. There's not much to show for that time, it was mostly just playing around.

The second hour, I actually made something. It's definitely not good, but I can't complain for spending less than an hour on it. There's trees and grass that blows in the wind and gravity! If I were to program all that myself, it would take months. I'm happy that I'm not writing it all myself.

One of the features of Unity is that you can compile your game into a web application. I tried it out and it didn't seem to work so well. However, I did build it as a Windows executable which you can download here. Again, don't expect too much, but try not to fall off the edge of the world. Oh, and I promise I didn't add any viruses (or did I?).
Posted by mr mike at 8:34 PM