Artist night this week did not go as planned, but it was still great fun. I had scheduled to go take some pictures outside. I had even timed things just right so I would be outside to catch golden hour. Unfortunately, the weather didn't cooperate and it was rainy outside. So Plan B was implemented. However, there was no actual Plan B planned, so it was a spur of the moment plan. I went to the mall to walk around and take some pictures there instead of taking them outside. It didn't turn out too well because some of the stores didn't like people taking pictures inside. And I felt too creepy taking pictures of people without them knowing. It was still an interesting night. I'd count it as a night of exploring the art of marketing.

The most fascinating thing for me at the mall was the weird advertisements that the stores had. Here's an example: 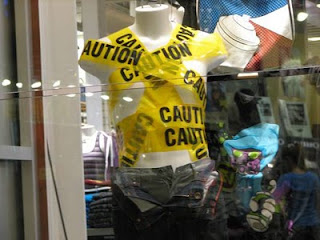 This was at a clothing store. I don't understand how dressing up a male mannequin in three pairs of pants and caution tape would help them sell their clothes. Let's try to sell clothes by having the mannequin do it wrong. I imagine wearing three pairs of pants would be dreadfully uncomfortable. Plus, it's not like you can display all three at the same time, it's only the outer one that people see.

I think the shoe store was pretty silly as well. All the graphics in the store showed the top half of their models. None of them showed shoes at all! How does that help you sell shoes? They should have been pictures of happy people wearing the shoes. Pictures of smiling people can be used for selling just about anything. I took some pictures of that store too, but they turned out too blurry.

The next interesting part for me was to observe the strange things that stores sell. Here's two of my favorite. They're favorites because they're so awful. (Thank you Tai Pan Trading for selling these wonders.) 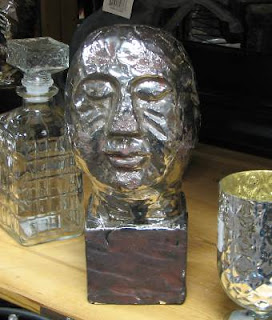 First, we have a golden head. Not just any head, a slightly misshapen and fairly ugly golden head. You can also get a matching beaten up golden cup to go with it. I can imagine seeing this type of thing at Universal Studios, but not at a home decor store. If you're selling this kinds of stuff, you also need to sell a leather jacket and whip to go with it. I wonder if people actually buy it. I hope not. 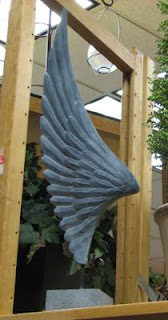 Additionally, you can buy an ugly old fashioned wooden wall clock shaped like a boat propeller. There's a whole stack of those as well. They were even on special (imagine that). 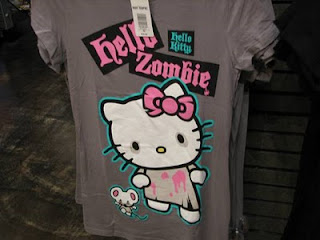 The mall wasn't all bad. I found two things that really made me smile. First was this most excellent t-shirt. Hello Kitty as a zombie? how can you get any better than that? I'll tell you, have a couple variations of Hello Kitty as a zombie! If I had a girlfriend, I'd get her one of each. (Two or three of each if she really wanted it.) I'm tempted to get one for myself, just for the heck of it. 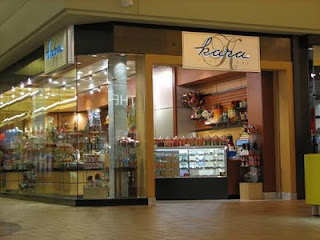 Finally, there was the chocolate store. I LOVE chocolate and I hadn't noticed this one before. It's probably been there for years, but as I've said, I don't go to the mall very often. They sell packages of chocolate that you can melt to put in molds. That's going to be my artist night for next week actually. I bought some Halloween themed molds which should arrive sometime soon. I can't wait. It also reminded me of my chocolate making friend who I get to see this weekend. Sweet!

And just for fun, I found another interesting site when I was checking my spelling of the word 'awful.' Check it out here: http://www.awfulplasticsurgery.com/
Posted by mr mike at 9:07 PM