I was working on installing Ubuntu on a computer at work today and ran into a couple interesting errors. I've installed various versions of Linux on various machines and have never seen errors like this. I had to run the install five or six times and in the end, I wasn't successful at getting that particular machine to run it.

The first error came from Ubuntu itself. The install kept saying that either the hard drive or the install media was bad. It could have been the hard drive, but I've used the CD on other machines without a problem. After a couple of other error dialogs, I eventually saw this screen: 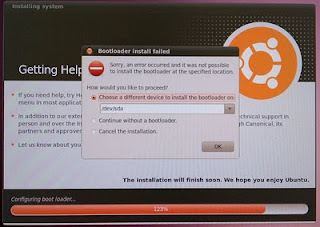 The other fun message came when I looked through that computer's BIOS settings to see if there was anything strange with the drive. I found this screen:

This one is just plain silly. I had just rebooted the computer and entered System Setup, so how am I supposed to change the password? Not only that, but it's telling me to power off the system to enter System Setup. How can I do that if the machine is powered off?
Posted by mr mike at 12:23 PM

Email ThisBlogThis!Share to TwitterShare to FacebookShare to Pinterest
Labels: computers