I finally got a chance to mold some chocolates tonight. I remember making these things with my family when I was a lot younger. It seemed so much easier back then. Then again, this is the first time I have molded chocolate in more than 15 years, so I shouldn't have expected it to be super easy.

I bought the molds from Amazon (my favorite store ever) and they arrived last Saturday. I even tried to get ones that looked like what we had when I was younger. I bought the melting chocolate at an arts and crafts store close to my house. 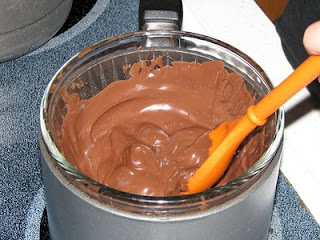 A bowl full of warm, melted, chocolatey awesomeness. It smelled really good too. I was tempted to pick up the spoon and shovel it into my mouth. But I refrained. (That is a scene from another story that's running around in my head though.) It was also really fun to play with. When it was warm, I could spoon a whole glob of chocolate into the air. It would solidify just a little bit so it kept its shape. When I wiggled the spoon though, it would liquify again and drip back into the bowl. Fascinating.

Painting the chocolate was the difficult part. I only bought brown and white pieces thinking that food coloring would work for the other Halloween colors that were needed. It didn't work quite as well as I had hoped. One drop of the food coloring totally changed the melted white candy from a smooth, melted consistency to a dry, crumbly mess. That really surprised me. Adding a lot more melted chocolate to the colored crumbles finally made it useful again. Next time, I'll just get the colored candy bags.

Painting the molds took a lot longer than I was planning. You need to color all the parts you want colored first. Then you freeze the molds to let the chocolate solidify, then you can fill in the rest of the space. All the molds had lots of details that could be filled in, but I didn't have the patience to do all of it. In the end, I only used three colors - orange, black, and white. But that worked pretty well for a lot of the Halloween molds. 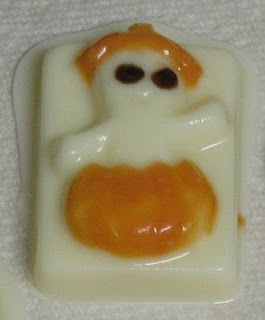 This ghost shows how they turned out. It's definitely not perfect, but who cares? I actually like how his eyes turned out a little crazy. If I had more time, I would have gone with a white ghost and a black background. Oh well, at least I have more ideas for next time.

Altogether, it was a really fun artist's night. It probably would have been better if I had more sleep the last two nights, but what can you do when stories and characters are running around, wreaking havoc in your mind?
Posted by mr mike at 10:19 PM